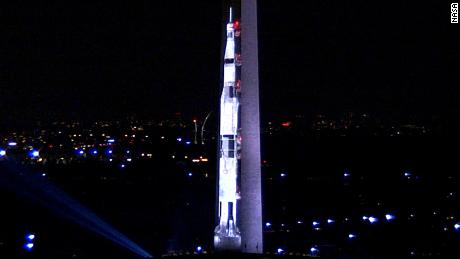 (CNN) – The Washington Monument just got even more iconic.

On Tuesday, the 50th anniversary of the Apollo 11 launch, the 555-foot national symbol lit up with an image of the moon-bound shuttle blasting into space.
The 363-foot projection of the Saturn V rocket will appear for two hours every night during the anniversary of the mission that put the first two humans — both Americans — on the moon.

Source: For Apollo 11’s moon landing anniversary, the Washington Monument was made to look like a rocket – CNN